Ammonia as a marine fuel – Summary

Techno-economic assessment of ammonia as a marine fuel – Concise Summary

The study aims to clarify, summarize and offer a rapid calculation and estimation by means of a sophisticated spreadsheet model, using the current technical knowledge for the application in such installations and the financial range of the costs involved. The created model gives the freedom to change a multiple of parameters in order to explore different scenarios and makes it flexible for utilization in variety of applications, including investments. The thesis provides conclusions drawn by the comparison of usage of the most common types of fossil fuels and ammonia fuel depending on the method of production, as well as different most likely scenarios of costs development. The spreadsheet model created in the thesis estimates and compares the benefits in the carbon emissions with the different fuels and presents the results also in percentages. An approximate estimation of the Carbon Intensity Index improvement is indicated in case the fuel is substituted with ammonia. The thesis combines digital, engineering and economical methods and knowledge with the available literature and data in order to present and give an upgraded view of the topic, which could serve as a basis for further development, management of projects and financial decisions for ship Owners and stakeholders.

Ammonia as a potential zero carbon fuel option, offers a viable solution especially suitable for the deep-sea shipping, where storage of sufficient energy is required available onboard for the intended voyage, considering also weather implications.  It appears that all challenges that ammonia faces as a marine fuel, have already existing solutions. The two-stroke diesel engine technology with pilot fuel that can handle practically any fuel can cope with the hard flammability and the low flame propagation of ammonia.

Thus, it emerges the necessity ammonia to be assessed economically as a marine fuel, implementing the available in the literature technical and economic knowledge for the production and usage as a fuel in internal combustion engines for marine application. An automated model for calculation of costs, using already known relations, was developed in this work in order to able to easy and quickly compare ammonia to existing fossil fuels and to draw up conclusions.

The current worst-case scenario prices of bunker fuels, natural gas and electricity costs per MWh for industrial users are used as input data, as well as the specific fuel consumption of the internal combustion engines. The total required power for main propulsion and auxiliary power has to be chosen for a specific type of vessels, where three options with average parameters are presented. The percentage of the pilot or promoting fossil fuel can be modified, giving also the freedom a few other parameters to be modified, like percentage of usage of ammonia as fuel for the Auxiliary engines, penalty fee per ton of CO2 emissions. One of the major assumptions on which the model is built is the estimated thermal energy efficiency of the two-stroke internal combustion engine, which taken with ammonia is chosen close to the modern internal combustion engine using fossil fuel – namely 50% [1].

Furthermore, the carbon emissions are calculated once originating only from the combustion of the fuel and secondly total emissions, including these for the production of the respective fuel and the upstream carbon footprint to end up as total “Well-to-Hull” emissions.

As a conclusion, we can say that if a ship switches to using green ammonia as a fuel with the proposed in the model setup, namely main engine being dual fuel two-stroke low speed engine with 15% pilot diesel fuel and auxiliary engines at least in the first installations to be only diesel fuelled, around 77% to 79% of the CO2 emissions will be saved, calculations based on daily consumption when sailing.

The conventionally produced ammonia with the currently widely used technologies from natural gas (or also called brown ammonia) will have similar range of carbon footprint as the usage of MDO, if we take into consideration the well-to-wake carbon emissions, including for processing in the refinery. The maximum increase percentage will be 8.11% more CO2 emissions than MDO, if we take the worst-case scenario for the production of ammonia, namely a less efficient production plant emitting 2.0 t-CO2/t-NH3, but if we produce ammonia with the available best efficient plant emitting 1.6 t-CO2/t-NH3 there will be 8.9% carbon emission saving.

An important conclusion is that very roughly around 25% of the energy captured from the renewable sources as wind and solar will be actually transferred to the propulsion of the vessel, when using the described in the Thesis technologies for production and combustion of green ammonia. More or less from 10MWh renewable electricity, we will have only 2.5 MWh on the ship’s propeller. The neutral carbon fuel offer potential for future improvement of the efficiency, when the technologies mature, scale up or are substituted by new more efficient technologies, like fuel cells or innovative ways of ammonia production.

The costs for fuel of the ships (Table 1.) will be relatively in the same range of 1% to 2.3% between the daily costs when sailing on MDO, brown or green ammonia, with an expected price of the renewable ammonia in 2030 by 1 GW size plant using mixed PEM and SOEC electrolysers in the range of approximately 475 USD/MT-NH3 including the capital costs [2] and a penalty of 100 USD per CO2 ton is introduced. For this case the price of brown ammonia is assumed to 250 USD/MT-NH3, being the average price of ammonia over the past few years 2017 – Feb.2020 [3].

The daily costs for fuel when using green ammonia will increase with around 58.5% in comparison to using MDO (Table 2.), if the price of green ammonia is assumed 850 USD per tonne, expected to be the price of the first small scale green ammonia producers in 2025, based on the expected range of green electricity price of around 30 EUR/MWh. However, the green ammonia will be on the same price level or slightly cheaper than brown ammonia, since we have assumed a CO2 penalty fee of 100 USD per tonne and a CO2 emission factor for the production of brown ammonia of 2.0 t-CO2/t-fuel. In this set up from the model is visible that the ship daily costs for fuel when using ammonia and MDO become even if we increase the CO2 penalty fee to around 300 USD per tonne.

The CO2 penalty fee has an equalizing effect on the differences between the costs for the fossil and carbon neutral fuels. As such, the CO2 penalty is benefiting the introduction of alternative fuels.

The Carbon Intensity Index will be greatly improved especially in the case of ships with huge power demand and respectively fuel consumption, although space for the accommodation of the ammonia tanks will have to be provided onboard and would be 4.1 larger than the volume for MDO, reducing the cargo carrying capacity on each vessel differently as the  examples given in the full version of the  study.

The created model gives the opportunity to modify the majority of the input parameters so that it can be used in a multiple of cases to evaluate and compare costs and emissions of using the most common used types of conventional fossil fuels against the different types of ammonia depending on its carbon footprint, which makes the model extremely valuable when taking investment decisions especially considering that the energy prices are volatile and such a vessel is not yet commercially available, although a number of Approvals In Principle for vessels with ammonia fuel propulsion were obtained and the engine was reported to be delivered during the first half of 2024 [4].

Table 1. Printout from the model in the case of average over the past few years brown ammonia fuel prices, namely 250 USD/MT-NH3 and green ammonia expected price of 450 USD/MT-NH3 in 2030 with 1 GW size production plant. 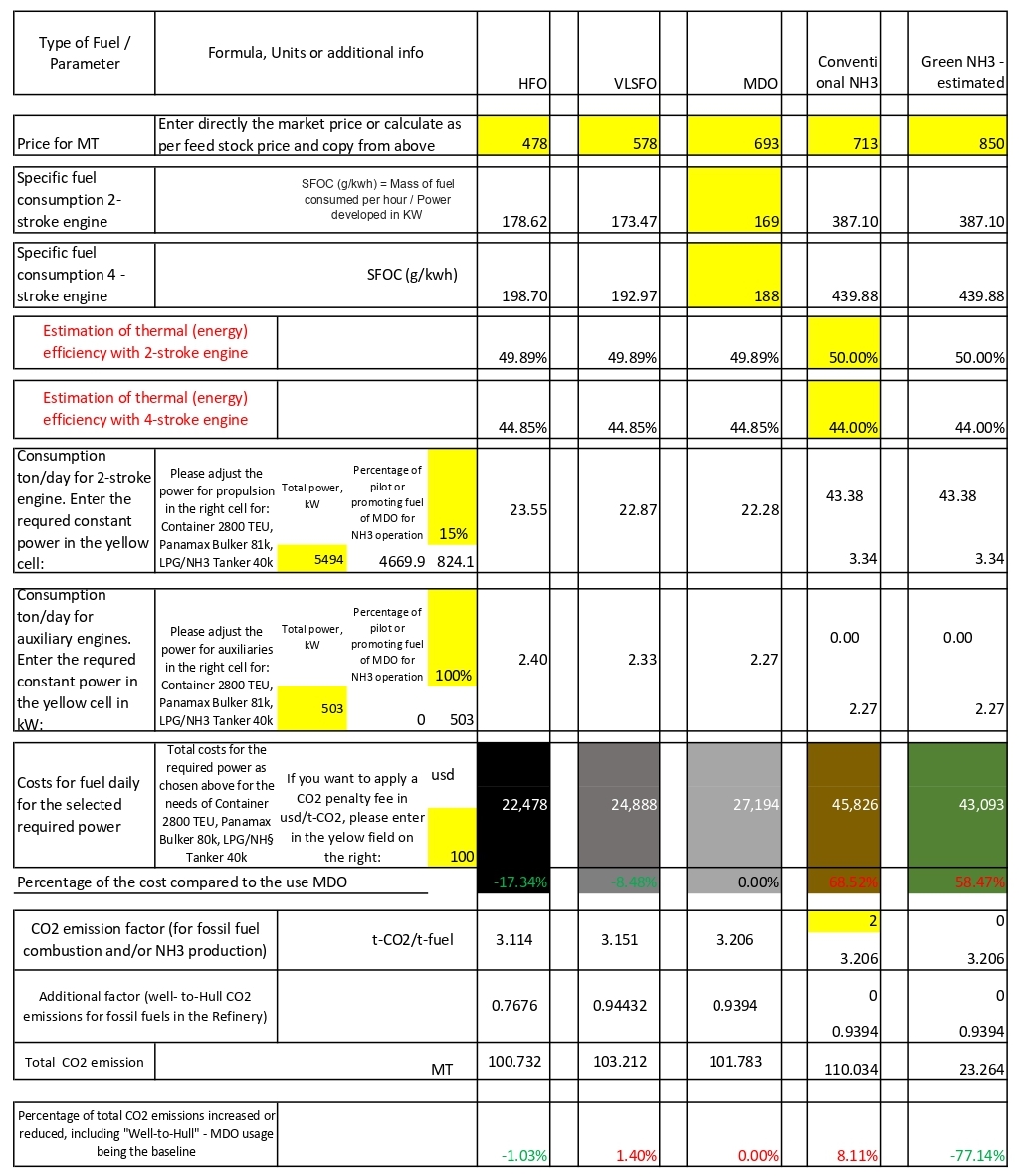